Yola Angeline Visit Website
Yola Angeline is a graduate of a Bachelor’s Degree in Nursing and currently an international freelancer and blogger.
Books

The Life-Changing Magic of Tidying Up: The Japanese Art of Decluttering and Organizing

Have you always experienced getting stressed out because of seeing your room or office cluttered and disorganized? Well, Marie Kondo’s approach on decluttering might as well work for you. It is mentioned in her NY Times bestseller book, “The Life Changing Magic of Tidying Up” all the necessary tips on how to get your room, home or workplace well organized that will surely make a positive impact in your life and in your career.

Marie Kondo’s book will provide you a glimpse of how the tidying session will transform your life and yourself especially in terms of productivity. It all comes down to the big question, “Does your stuff spark joy?” In Marie’s point of view, if that particular stuff does not bring happiness to you, you should then dispose of it, sell or donate it. Moreover, her simple strategy which she called KonMari method can really make a difference in your life. 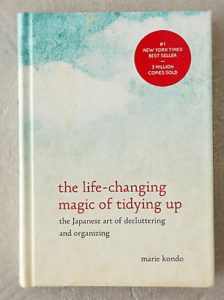 How Does the KonMari Method Work?

Being organized and tidy makes you feel more powerful and in control of your life. Seeing that your things are organized will also make you feel much more comfortable with your life, living in an organized home. Kondo’s teachings are not the usual because of the spiritual practices it presents in the possessions and in the home itself, yet her KonMari Method might as well make a huge difference and can be life-changing. 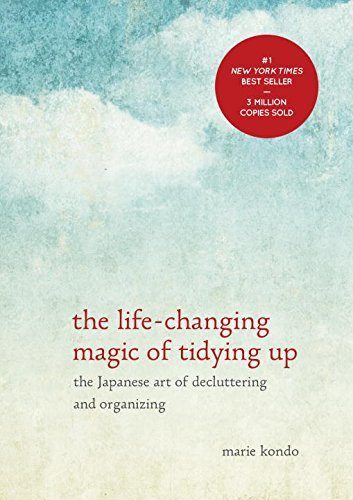 The Life-Changing Magic of Tidying Up: The Japanese Art of Decluttering and Organizing

Despite constant efforts to declutter your home, do papers still accumulate like snowdrifts and clothes pile up like a tangled mess of noodles?

Japanese cleaning consultant Marie Kondo takes tidying to a whole new level, promising that if you properly simplify and organize your home once, you’ll never have to do it again. Most methods advocate a room-by-room or little-by-little approach, which doom you to pick away at your piles of stuff forever. The KonMari Method, with its revolutionary category-by-category system, leads to lasting results. In fact, none of Kondo’s clients have lapsed (and she still has a three-month waiting list).

With detailed guidance for determining which items in your house “spark joy” (and which don’t), this international bestseller featuring Tokyo’s newest lifestyle phenomenon will help you clear your clutter and enjoy the unique magic of a tidy home—and the calm, motivated mindset it can inspire.

The Life-Changing Magic of Tidying Up: The Japanese Art of Decluttering and Organizing by Marie Kondo 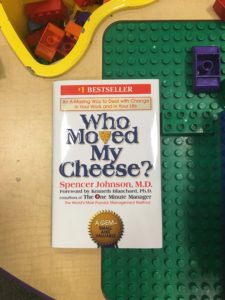 Eat That Frog!: 21 Great Ways to Stop Procrastinating and Get More Done in Less Time

For new and aspiring entrepreneurs, effective time management is a great foundation of success. It takes a lot of courage not to procrastinate and to do tasks according to priority and schedule. Procrastination is quite typical, especially for people who work on environment, having a lot of employees or using a lot of devices. In the modern world, there are so many distractions such as the social media platforms, noise, unwanted visitors, phone calls, unimportant emails, and other things which can greatly affect if not kill productivity. Therefore, it is quite vital for entrepreneurs and even workers to read the book entitled, Eat That Frog!: 21 Great Ways to Stop Procrastinating and Get More Done in Less Time written by Brian Tracy wherein he recommends that in order to be successful, people should eat the biggest and ugliest frog of all. 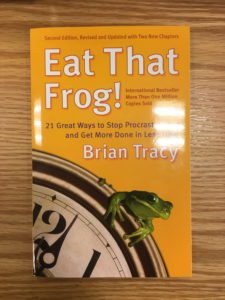 So the goal is to eat the biggest and the ugliest frog first thing in the morning and sure, nothing worse will happen the rest of the day. This is a guide that invokes empowerment, thus optimizes service and performance. The said “biggest and ugliest frog” is the hardest, biggest, and most important task a person needs to do that should be accomplished first before doing the easy ones. Doing the major and most important work motivates and triggers the release of “endorphins”, a morphine-like substance in the brain that will make a person feel more active, creative, positive, and confident. Moreover, self-discipline is one way of accomplishing and resisting the urge to do anything else. Prioritization is, therefore, essential to determine which work should be done first. People usually get overwhelmed with having so many things to do, but there’s not enough time. The said rule is proven to let an individual catch up with tasks and responsibilities yet enjoy a higher quality of life with loved ones at the same time. 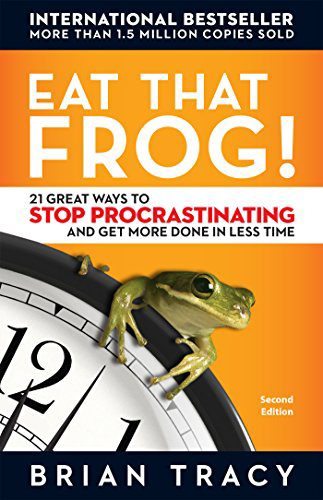 Eat That Frog!: 21 Great Ways to Stop Procrastinating and Get More Done in Less Time

The legendary Eat That Frog! (more than 450,000 copies sold and translated into 23 languages) provides the 21 most effective methods for conquering procrastination and accomplishing more. This new edition is revised and updated throughout, and includes brand new information on how to keep technology...

About the Book
The legendary Eat That Frog! (more than 450,000 copies sold and translated into 23 languages) provides the 21 most effective methods for conquering procrastination and accomplishing more. This new edition is revised and updated throughout, and includes brand new information on how to keep technology from dominating our time.
email
Look Inside

Eat That Frog!: 21 Great Ways to Stop Procrastinating and Get More Done in Less Time by Brian Tracy